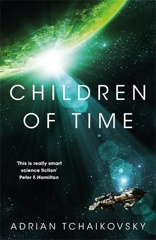 With Adrian Tchaikovsky’s Children of Time I’ve finally come upon a book that most of my friends liked or loved, and that I couldn’t get into, for … complex reasons.

Children of Time tells two stories. On the one hand, a future where humanity is nearly extinct, due to their own … you know. Look at our planet. All of that. Bad decisions. Ego. Depleting the planet. Depleting other planets. Infighting. Lots and lots of politics. The last of humanity lives through a deep nuclear winter, then begins to reassemble the traces of the previous technological culture, and finally sets out in big ships because it becomes clear that Earth won’t be habitable to humans ever again. This story arc follows the ship, and its characters. None of them are terribly likable. The protagonist is a cowardly “Classicist” who studied pre-war Earth, joined with a cynic Engineer, a megalomaniac commander, a god-playing scientist, and the head of security with ambitions of grandeur. Can you spot the characters below the stereotypes?

On the other, we get a story about the last human experiement. On the planet in question, a megalomaniac scientist wanted to “uplift” monkeys, by magically (sorry, genetically) advancing evolution. Sadly the monkeys died a gruesome death, and the virus/genome/magic entered the local spiders instead, and also ants, some sea creatures, etc. We follow the rise of the spider civilisation over thousands of years, in short episodes. This part of the story was very good. They are weird, alien creatures following their own cultural logic and laws. Brilliant scifi, wonderfully written. It’s hard to make this millennia spanning episodic style work, but it works very very well.

So why did I not like the book in the end? It’s a couple of things, really. The spider arc was good, the human arc was predictable, and flat, and … somewhat repulsive, really. Part of that is my mood at the time of reading, but I found the book horribly depressing. It shows, over and over and fucking over, the worst of humanity, with honestly nearly no redeeming features. The destructiveness of our actions, the lack of collaboration and foresight, the sheer self-centeredness … it was a bit much for me. Couple that with the fact that the ending was a bit cheap and also extremely foreshadowed (or just predictable) from the half-way point on, and the book left me with more bad feelings than good, despite its extremely brilliant half.

A Fire Upon the Deep