After reading The Dragon Waiting, I wanted more Alternate History, and Romanitas seemed like an obvious choice. It’s, to say it with the recommendation, Fatherland but with Rome. In a world with current-time tech, the Roman Empire has never fallen, it never even moved to Byzantium. All of society is just as in the Rome of Tiberius, only with tech. So we have no emancipation, an Imperial family with an Emperor choosing his successor, and of course: slavery and crucifiction, with high-tech iron crosses along major roads.

Marcus Protagonistus (he has a real name, but he also has a bad case of protagonist syndrome) is the nephew of the Emperor and is father is heir to the throne until he is murdered, with his wife, just before the beginning of the book. Drink one for orphaned protagonist. It turns out that his death was not a car accident – strong “You are a wizard, Marcus” vibes – and he was probably murdered because he wanted to abolish slavery, by people who rely on slaves and don’t want Rome to fall. Marcus has to flee and is mildly determined to also abolish slavery.

Guess who the good guys are.

The plot continues as you’d guess: He meets the other POV characters, who are escaped slaves with slightly supernatural capabilities – the strong wild girl and the sensitive boy –, token character development happens, the protagonist is sent up the tree of compilcations, pelted with the rocks of despair and conveniently set-up family intrigue, and finally permitted down in imperial success, with plenty of hints that are meant to draw you into the next book.

I’m hard on this book because it lost me very early on – not as much my suspension of disbelief but my entire immersion was gone once it got clear that little thought had gone into the practicalities of this world. There’s an appendix with a rough timeline for this empire, but all the juicy (and unlikely) bits are left out. It claims that for a thousand years, succession-by-appointment has not been a problem, for example! The story hinges on the fact that the protagonist, who is part of the imperial family and second-in-line for the throne, is absolutely astonished to find intrigue and assassination attempts, and is in no way prepared for it. The tech level seems to have just … spawned? We see television and security cameras in places, but no very hard propaganda or surveillance. Either no computers at all or completely under-utilised ones. The bit of deeper worldbuilding we get is “Rome wants war because they’re running low on slaves”.

The characters have their one or two adjectives and stay flat, too. What really shone in places, though, was the writing. McDougall manages to conjure up atmosphere very well, and the actual interactions between people often felt raw and real and deeply uncomfortable. It’s what kept me going despite my lack of immersion. 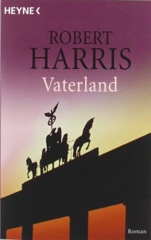