In some very technical sense, this book is Urban Fantasy: there are fantastical elements, and it takes place in a city. As you may have guessed, the city is Baghdad. The time is not long after Hussein’s death, so it’s less like a city and more like a war zone, but still – Urban Fantasy.

Thankfully, and I say this as somebody who occasionally reads and enjoys the genre, this book does not follow genre conventions. For one, the fantastical aspects make their appearance late and while they are really cool (Avicenna makes an appearance!), they don’t dominate the story.

What instead dominates the story is how people deal with the horrors of war, particularly war impact and its consequences in a city. It’s gruesome and violent, occasionally over-the-top (Hossain can do absurdist humour very well), but it never lets you forget how fundamentally terrible war is, and how it forces decent people to do unspeakable things. The supernatural aspect does not serve to soften or hide or motivate this – it’s just there, and it’s just as matter-of-fact and humanly flawed as the rest of the plot.

Despite the focus on war, PTSD, violence, death, torture, and pain – I enjoyed reading this book, and it managed to be fun, not depressing. And that’s despite (or due? probably not) the fact that it’s terribly real. Even though there would be room for a sequel, the author has no plans to write one, and while that’s probably wise, I can’t help but be a little sad.

The Amulet of Samarkand 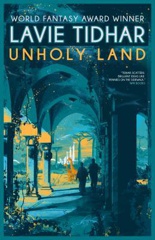