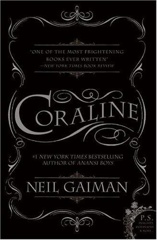 Coraline is a wonderful book. Terrifying, too. Coraline and her parents move to a new place, where there’s nothing apart from the other (strange!) people living in the house. Her parents are busy all day, and she’s just left to her own devices. So she wanders around and eventually finds a mirror world, where everything is duplicated, only uncanny and weird – and where she finds parents who love her and have time for her. Now if only they were human.

I first read Coraline when I was nine, and I liked it a whole lot. It was fun, and weird in all the right ways, and the young heroine triumphed in a way that was not stupid. Then, when the movie came out, I re-read the book as an adult and I was terrified. It was so bad! Everything was scary or intensely uncomfortable. I’m very impressed with child-me for being so chill about it.

I think the best part is the truth in everything Gaiman describes. The feeling of boredom and abandonment is very real. The impression that the adult world is extremely weird and follows unforgiving and unpredictable rules is spot on. And as a child, I was very sure that adults could not actually protect themselves (sadly true) and felt seen by Coraline.

Also, this book has forever coloured how I view cats.

For more adventuring heroines in fantastic worlds, The Girl Who Circumnavigated Fairyland in a Ship of Her Own Making is nice and less brutal. From Neil Gaiman, The Graveyard Book has a similar vibe, as does The Ocean at the End of the Lane which is geared more towards adults.