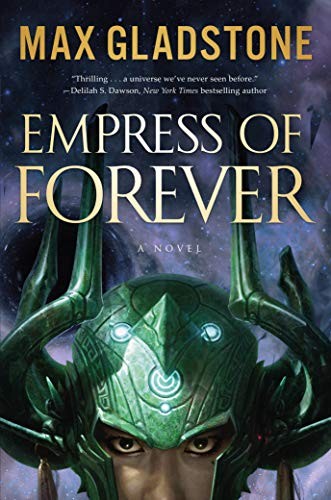 Max Gladstone is an author I like a lot. He’s half of the brilliance of Time War, and his Craft Sequence is amazing second-world urban fantasy. I went into this book curious how Gladstone would approach Space Opera, but confident I would like it – boy, was I disappointed. It took me the better part of a month to dig through this book, and it ust dragged on.

Our protagonist is a ruthless super-rich tech genius dick who sacrificed pretty much everything for her success (owning a super-Bezos like empire). She gets transported into a different world/universe/whatever, and is probably meant to take us on what cover texts tend to call a tour de force of that world. If that doesn’t sound very relatable or compelling: damn straight. Her main motivation is supposed to be getting back to Earth, because a) she has plans and b) she maybe discovered her humanity idk man. In an effort to make up for her inherent dickishness, her intelligence and skill at thinking her way out of a problem is highlighted, sometimes, when the plot feels like it. I didn’t care about her, but that’s not to say that the story would have been better without her. I’m not even sure how this was supposed to work, as it’s clear she’s intended to be an arrogant bastard.

Anyhow, she gets transported to the wider universe and has, again for reasons, to battle the Empress of Forever, who is Evil because she destroys civilisations when they reach a too high level of tech advancement, because that kind of thing attracts the Blight (or whatever it’s called). The mid-crisis reveal that the two sociopathic megalomanic women are the same person didn’t feel very surprising at that point.

I’d normally like the way technology raises some people to near-godhood with powers to go with it, and the space monks looking for meaning in the Empress and her leftovers, and beings eating matter on the scale of plantes, and the revenge arc of the actually pretty cool imprisoned vengeful goddess Zanj, and the people who live with a mix of iron age and future tech remains in their shattered world, the humans who can think their way into spaceships and become them rather than pilot them – but all of it is just thrown together, a big heap of uncoordinated worldbuilding that occasionally remembers to advance the story. Don’t get me started on the romance that would have been much better off as a friendship, or a swift kick to the protagonist’s head. The romantic interest at some point tells the protagonist honestly everything that’s wrong with her in a giant, well-justified rant, and then … nothing happens.

There are glimpses in the worldbuilding of what I usually love about Gladstone, but not enough. Or rather: too much, too uncoordinated, without rhyme or reason. And the paragraph-level writing is as amazing as always, and possibly the only reason that this isn’t a one-star review. I’m not sure what happened with this book, and I’ll definitely read Gladstone’s upcoming urban fantasy release, but I sure hope that the Craft Series wasn’t a one time wonder.