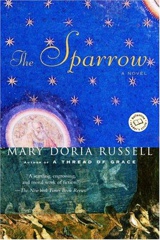 I liked The Sparrow a whole lot. Part of that is just that I like the premise: Jesuit First Contact? Hell yes! The Jesuits are the science-minded and intellectual ones among the Catholic orders, and at the same time very capable of actions and decision-making.

There are some things I positively adored about this book: I liked the world-building, both on Earth and off, and found the near future very relatable and not overdone towards u- or dystopia. Honestly, the character building and especially the dialogue were excellent. The characters were super alive and will stay with me for a while, as will their dialogue and development. The pacing was also excellent for me.

The plot and the aliens on the other hand were only so-so. The plot had its strengths, was well-told and not overly predictable (packed some punches towards the end). The aliens were too human/mammalian for my tastes. Communication has only a language/culture barrier, and is apparently easily overcome with a year or two of work and play. Much meh.

My real problem with the book involves how everybody in there deals with sexuality, namely prostitution and sexual assault. Apparently nobody is able to think when it comes to these things, or to talk, or to be sensible in any way. That’s not because the people involved are Catholic monks (believe me), it’s straight up the author’s culture creeping in. Big time. It was distracting and made me increasingly annoyed, to the point of probably keeping me from reading the second book.