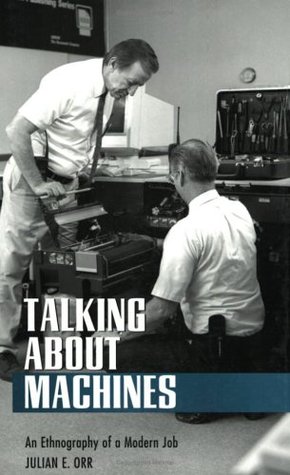 This is technical anthropology, and it is thorough and much better than you’d expect from a potentially dry dissertation from 1990, described as an “underground classic among ethnographers of work”. The central thesis of the book is that (technical) knowledge is a socially distributed resource that is transported by way of oral culture and that debugging works by constructing a narrative between technician, customer and machine. More details below, but this is both a central insight, well described and documented, and applicable to most areas of (work) life.

Orr was shadowing Xerox technicians at their work of servicing and repairing photocopiers (helpfully, Orr had learnt this job, on slightly different machines, too, so he wasn’t just an annoying nosy interloper). He initially describes their work as a “continuous highly skilled improvisation within a triangular relationship of technician, customer, and machine”, which very clearly demonstrates the respect and depth Orr displays throughout the book. He was only accompanying them during their work hours, there were no additional structured interviews.

A significant part of the job is social. Extracting information from non-technical users, discovering their understanding, and then reflecting the technician’s knowledge in a way that will shape the users’ behaviour is tricky, and also always fraught with office politics, history, colleague’s opinions and so on. They are very aware themselves that users are a large part of the equation – they even have a saying: “Don’t fix the machine; fix the customer!”

Once a story has been formed by means of diagnosis, and performed by means of repair, it can be shared with the professional community. The tellers use it to build their identity (either of competence, when in the starring role, or as knowledgeable part of the community, when repeating somebody else’s story). Stories are told in a very concise manner, as repeating obvious story elements would be superflous and mildly insulting to the listeners. It’s assumed that all competent technicians will tell stories, both to display status, and to instruct.

This comes with a certain civil competitiveness that manifests in one-upmanship in their stories about hard fixes, or challenges when the narrator only tells the problem, and asks the audience to provide diagnosis. This kind of one-upmanship, or challenge-response jokes, are only used in private, never in front of customers, where technicians present in a carefully controlled manner, and only joke at their own expense.

This social cohesion also shows up in the interesting way that technicians are more worried about the social damage to another technician, when they have to take a job in their territory, than about the machine they are servicing, because they know full well that social relationships are harder to repair than machines.

Orr observes that the telling of debugging narratives both demonstrates and shares the technicians’ mastery, creating and celebrating their identities (in this case: as masters of the black arts of dealing with machines and customers, both). They provide information about technical matters – past fixes, emerging problems, warnings of incorrect documentation –, but also social and administrative topics, like changes among customers, area distributions, and office politics.

These stories, usually shared during meals, are necessary for the technicians to remain capable and perform their work. The official documentation is not always correct, and rarely sufficient. Well-known workarounds int he fields (starting with valid substitutes for individual parts and ending with MacGuyver style solutions to common problems) are only communicated here.

On the nature of work

This time also reflects that the technicians’ status straddled both worlds: They were skilled workers dressed like office workers, ties and all, their tool boxes made to look like briefcases, while also performing dirty work, setting them apart from pure office workers.

Orr also pointedly observes that this shift has also shifted the meaning of “to work” to have an added, possibly even primary, meaning of “to be employed” rather than “to do a thing”.

Another still very relevant comment is that the definition of work seems to be up to management, who focus on the activities required to deliver a product, and disregard other equally necessary activities, that need then to be snuck in by people on the ground. For example, there is no alotted time for services technicians to casually visit the clients, inquire as to the state of everything, provide quick checks and education. But these encounters are vital, and technicians take care to get them done despite their tenuous status as not-really-work.

Orr also mentions that all the common management definitions of work are focused on individual workers, while the fact that work is commonly done by a group and an emergent professional community is rarely acknowledged. In this example, all work would be much, much worse or even impossible without the frequent shared lunches and exchanges of experience. However, no management would have classed those things as work.

But that’s not the only failure of management! They also tend to see technicians not as skilled workers (as they see themselves), but as easily replaced by semiskilled labour with a good set of instructions. This state is obviously advantageous to the company, and they try to produce and maintain it by providing worse documentation, dumbed down to a level that does not permit complex troubleshooting to emerge. So the second a problem diverges from the manual, it’s again down to skill and shared oral tradition. Because intentional de-skilling cannot deprive workers of skills they have, it only reduces the amount of information they receive.

When management attempts to de-skill and break up a community like that, it will resist in several ways. It may switch to “work-to-order” mode to show management what it would miss out on (in this case: only service machines according to the manual, not developing further fixes, and not maintaining customer relations). They may also devalue promotions heavily, preferring to remain a service technician rather than being promoted into in-house service or management. “This resistance can surprise employers who think of labor as a commodity that can be arranged to suit their ends.”

Equally, I liked the observation that technicians have trouble reasoning about details of the machine when they can’t see it in front of them. They can still figure out the larger scale problems, but they don’t remember things like the location of individual components in the machine. They also sometimes leave the technical field and get promoted to be managers, but few succeed there, most return to being technicians: “Most technicians would rather remain a technician-hero than become an organization manager”.

“The division between technician and senior technician is just one of seniority and salary; reputation and skill are not thought to be related to this distinction.” – things never change. And, how Marxian: “The occupational community shares few cultural values with the corporation; technicians from all over the country are much more alike than a technician and a salesperson from the same district.”

“What really holds their interest is a situation they do not understand.” - haha, nerds.

Machines are very much not all the same: technicians talk about the ones in their territories as individuals, with their specific histories, users, problems, anticipated problems, past fixes requiring special attention, and so on. And this kind of tricky detail is what really stood out to me: there is infinite complexity in detail, and you don’t know the dimensions of complexity involved in any job until you have worked it or have had trusted conversations with people who work it. 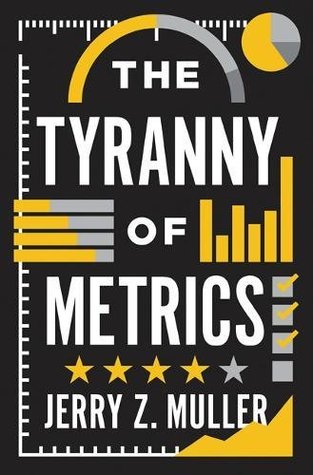 The Tyranny of Metrics