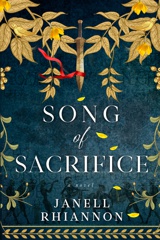 I’m a Greek mythology geek, and Song of Sacrifice by Janell Rhiannon (as an ARC via NetGalley) should’ve been right up my alley. Alas, it wasn’t – while it showed human perspectives on all the big players in the myths leading up to the Trojan war, the stories were as fragmented as the real myths, even if ordered by history. The novel thing I’d hope to see from a book such as this would be fleshed out characters and story arcs, but sadly, both the characters and the story stayed flat. The final annoyance was that roughly every time any couple had any type of sex, it had to be discussed and described in-depth, and not in great quality, either. While I like the frankness of the Greek myths, these scenes often served no reason. Sadly, I cannot recommend this book.