The Engines of God

This one is hard for me to rate, because I like scifi very much. And if anything is scifi, this book is! We have aliens, and space ships, and deep space puzzles, daring rescues that require engineering and science knowledge, some actual characters (some even with motivations! … at least a little).

But at the same time, nothing in this book felt compelling. It was just another scifi book. The plot/reveal is so heavily hinted at and foreshadowed that I was wondering if there was a twist coming (there wasn’t). And the pace was so very slow. I would have liked this book much more, if the same content had been given half the space.

There are some parts that stood out to me. On the negative side: Archaeology carries a lot of the plot and exposition, and it felt entirely arbitrary what the archaeologists would be able to extract from alien ruins. Sometimes they stood in puzzlement, and other times they could recite entire cultures, literary works, and political structures and motivations. I know we have to deal with that in real archaeology to a degree, too, but used as a storytelling device it felt cheap and broke my immersion.

On the positive side, occasionally McDevitt deviates from standard storytelling just a little bit, and it’s delightful. There will be casual foreshadowing of who will live and who will die, without further comment, and you, the reader, are left alone to deal with your feelings. This is a stylistic tool that I’ve loved ever since I’ve encountered Kurt Vonnegut do it in Slaughterhouse Five. Sadly, in a book that is already very slow, it doesn’t reach its full potential, but it definitely played a part in my decision to read through to the end. 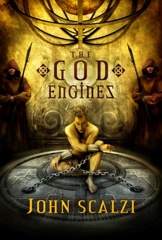