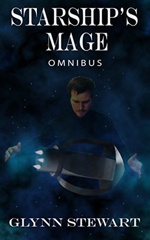 I really liked the premise of Glynn Stewart’s Starship Mage, but the execution was meh enough to get me to drop the book two thirds in. A world with magic for space travel, with defined rules and organisations and governance? Super cool, sign me up!

Sadly, the writing was lacking in ways that just threw me off. I wasn’t bothered all that much by the protagonist, who was a character-less stand-in young genius with tragic backstory. It was more that the writing in general was unpolished, could have used an editor, and increasingly read like it would work well on TV, but not in a book. Add in that the “Omnibus” of the consisting works was just taped together, without even removing the explanatory parts on the border of the books … Being reminded of who the MC’s girlfriend is over half-way through the book is just jarring, and sloppy work.