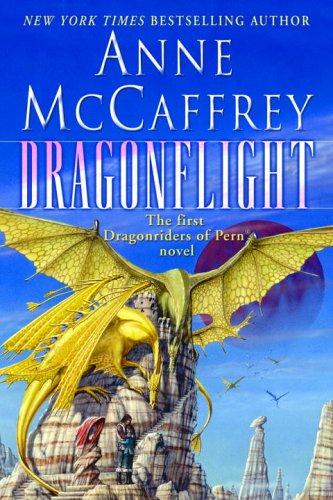 Okay look. Dragonriders? A whole social group structured around dragons?!! A whole society slowly losing their belief in the ancient threat that made them support and accept the dragon riders? It sounds so, so good. But.

The book, first part in the intimidatingly long Pern series, was a decent read, but shows its age in some meh ways and in some other actively uncomfortable ways. I know the 60s were a different time, but also, Babel-17 was published two years before this book, so I’m not inclined to be too understanding. The gender roles are beyond lazy and verge into terrible (I kept expecting subversion because this could not possibly be serious). All the women kinda suck, including the protagonist, and I don’t even want to go into the way sex is handled. Yikes. Y i k e s.

The worldbuilding is great and fun, and I want more. The harpers? The ancient traditions showing that spacefaring humans came to Pern and engineered dragons to protect against the extraterrestrial treat? All that slaps.

But then there’s the plot. It’s a bit all over the place, I believe because the book was made up from different stories, which is fine. But why, why the time travel? I’m not sure I’m willing to suspend my disbelief about the arbitrary rules of time travel for 23 more books.