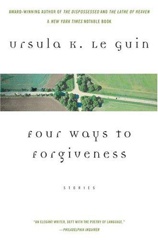 Four Ways to Forgiveness is part of Ursula K. Le Guin‘s Hainish Cycle, and gives us a bit of a backstory on the Hainish themselves, how the Ekumen was founded, and how worlds may come to join the Ekumen. The story is told in four parts, a character apiece. The characters do interact, but they form their own narratives. From the perspective of a slave, a military slave owner, an envoy, and a historian, we gain a perspective on the world of Werel, and the rebellion of the slaves against their owners.

I was very impressed with the discussion of slavery, dependence, culture, misogyny, and revolution from the different perspectives. It’s not easy reading though – Le Guin doesn’t shy away from depicting all the horrible parts of oppression and slavery. Despite that, the stories were touching and hopeful and noticeably written to work well together.

The Day Before the Revolution

The Word for World is Forest