This book could have been classic fantasy. It has all the right ingredients: Richard, the Woman, the Wizard, the Quest, the Traitor, the Evil Antagonist. Boring? Yes. Schematic? Couldn’t be more so. But still, a lot of Fantasy works like this. It’s not a crime, and in some regards, this book is just one of those very mediocre SFF books:

The author has a bad case of “tell, don’t show”, and his language and phrasing are far from lyrical. The story has some strong parts, but it’s mediocre and generic most of the time. Even the plot holes are generic.

It’s worse than extremely mediocre. It’s really really really bad (and the series gets worse from here, trust me). There’s the part where the author has to, at length, go into his torture fetish by having torture fetish nuns be a thing. There’s the protagonist who is not just a Gary Stu, he is all that is True and Good in the world, it’s his Power, don’t you know. There’s the fact that there is some very barely veiled political propaganda in there – the evil people want to be the absolute rulers and want to take away the people’s right to use fire, which absolutely is not a stand-in for guns, etc etc.

It’s truly truly bad. I can’t tell you how bad it is.

The absolutely epic and recommended SomethingAwful thread: “We’re only three chapters in and we’re already getting uncomfortably rapey.”

The Eye of the World 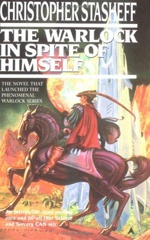 The Warlock in Spite of Himself