Foundryside by Robert Jackson Bennett is a hard book for me to rate. In the beginning it felt a bit lackluster, because it felt like very system-heavy Fantasy: Fantasy where the author cares more about the magic system than about the characters, or the worldbuilding, or anything else. After about a third of the book, it came close to hitting its stride, drawing me in and letting me feel with the thief-protagonist and her life and quandries. But then, towards the end, the book seemed to turn into a very heavy-handed metaphor on the dangers of artificial intelligence (and, to a lesser degree, computer science in general).

It could work for people less involved with programming the analogies are less obvious or heavy handed. It could work the half-machine people and the artificial intelligences talking about freedom, and choice, and which ways of changing reality are not as one-dimensional as it seemed. But despite liking many aspects of the world, it never really gripped me due to this. 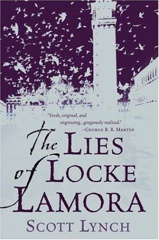