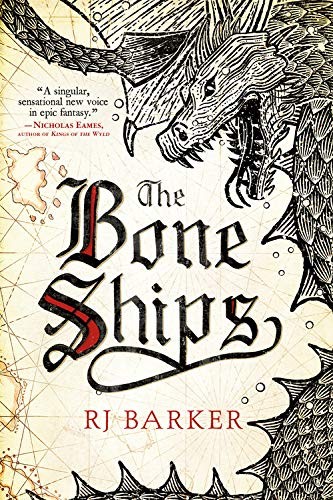 World-building at the detriment of plot and character development is usually a prerogative of sci-fi, but this book proves that fantasy can do it, too. The world is awesome: it’s a naval world, where most of the world is covered in water, which is inhabitated by very aggressive animals, and states consist of island chains. Barker’s worldbuilding is actually stunning: a coherent vision of society, customs and history down to fabrics used, gender roles, food chain logistics, magic, and social mobility. All told nicely within the story with barely and info dumps.

One example: since the whole world is much more dangerous than ours, birth rates are both lower and more important. As a consequence, the society is matriarchical, and women are more respected the more children they have born – at the same time, death in childbed or bearing children with birth defects (which has a higher chance of happening) is seen as a moral failing. One consequence is that captains are called “shipwives” and male pronouns are used for ships. ♥

The plot has to do with ongoing wars, the fact that ships are made from sea dragon bones, and stuff like that. The plot is much less interesting than the worldbuilding, and the characters are only really interesting as far as they enable the plot to show us more of the world. Which was perfectly fine by me – but it won’t be enough to get me to read a second part of the series. I’m very happy I read this one, though.