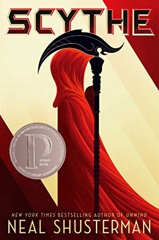 Scythe by Neal Shusterman is YA scifi, and as such I am not the target group. I read YA occasionally, though, so I am familiar with both good and bad examples. This one, to me, fell in the latter group. Shusterman built a utopia somehow founded on an all-knowing machine, which leads to humans being somewhat directionless immortals – who still go for jobs and make money. Imagine my raised eyebrows. Everything about this future is utterly boring – except, of course, the titular Scythes, which are more nonsensical than everything.

Scythes are the only humans who are permitted to kill other humans, to cull humanity’s growth (because apparently we can do all-knowing AI, and immortality, but not space. Go figure). They have a lot of freedom, including the method of death. Our two young opposite-gender protagonists (who absolutely unsurprisingly fall in love with one another, no matter how little sense that makes) are selected to become Scythes, but only one of them yada yada. Turns out, not all Scythes are paragons of virtue, some are plain capital-E Evil, on a power trip, and delight in killing lots of people in painful ways. If only this could’ve been predicted.

Please excuse my snark, but a completely boring and nonsensical premise has shattered my suspension of disbelief, and the lazy character building, and sloppy writing and copy editing, did the rest. After I reached the first half, I skipped through the rest, with the end providing exactly the unsurprising reveal you’d have guessed. I think the cover might be thin thing I liked best about the book.