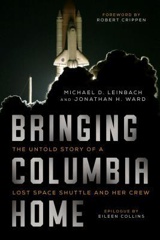 Bringing Columbia Home: The Untold Story of a Lost Space Shuttle and Her Crew

Bringing Columbia Home is the story of the aftermath of the break-up of the Columbia shuttle, told by Michael D. Leinbach who was a launch manager at NASA and bore responsibility during the collection of Columbia and the ensuing review. I didn’t really like the book – the author gave me the feeling that the book was more written for the people involved in the clean-up missions, both volunteers and professionals, than for an interested outsider like me. Some chapters feel more like a long list of names and their roles, to include everybody who did important work at the time, which was certainly important to those people, but at the same time a bit tedious. A bit of stylistic editing would have helped a lot here. I also felt that quite some things I’d be interested in (e.g. the concrete organizational consequences to change NASA feedback culture) were glossed over way too much.

But since Mr Leinbach dropped a lot of tiny interesting pieces of information and stories, and the subject matter is obviously fascinating, and I’m a nerd for both space and logistics, I still got some good moments out of it. If you’re similarly inclined, then I’d recommend the book, but otherwise you’ll probably come to the conclusion that knowledge of and dedication to the subject does not replace professional editing advice.

An Astronaut’s Guide to Life on Earth