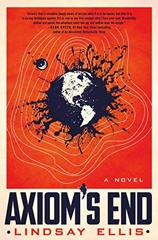 Unconvincing first-contact fiction. The protagonist is the daughter of quasi-Assange, and lives in poverty due to his actions after the divorce from her mother. It’s all pretty grim, and then the aliens land. For semi-random reasons, one of them picks her as its translator – nothing to do with her skill or anything, and the fact that she has studied linguistics has nothing to do with anything.

Some details stand out as good, but generally nothing convinced me. The writing quality is at decent web-serial/fanfic levels, which is not unreadable, but also nothing that entices me to read more. The aliens are always emphasised to be very alien and that anthromorphising them is useless … but nevertheless, the book proceeds to do just that left and right. There are some rare intentional parts, but mostly it’s just thoughtless storytelling. Cora is meant to be relatable, but feels hollow. The eventual interspecies romance felt inevitable and uninteresting.

Just didn’t work for me, all things considered.