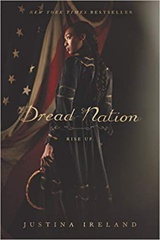 Zombie Western. Dread Nation by Justina Ireland had the potential to be a book I liked a lot, but … I didn’t. Its premise is that zombies rise in the US during the confederate wars, and so history changes. Slavery is abolished, but black people and Indians have to go to fighting schools and fight zombies. our protagonist is a black teenage girl in exactly that situation. She’s sassy, self-reliant, and generally has the potential to be a delightful nuisance.

Instead, both the story and the writing are somewhat of a slog. The protagonist’s voice breaks my suspension of disbelief by being all over the place, time-wise. Sometimes she sounds like she’s from the 90s. Sometimes, the 50s. Sometimes, the actual time the novel takes place in.

And also, during the whole somewhat incoherent plot, she never reaches her goals, or even works towards them in any meaningful fashion. Things happen to her, she snarks at them, and then she takes some half-baked action that either does nothing, or backfires. And then add some increasingly random writing towards the end (“Hey I also like girls” would have made much more sense if it had been shown, not told, and not towards the end, but while she was at an all-girls school?). I’d have loved to like this book, but I really couldn’t.