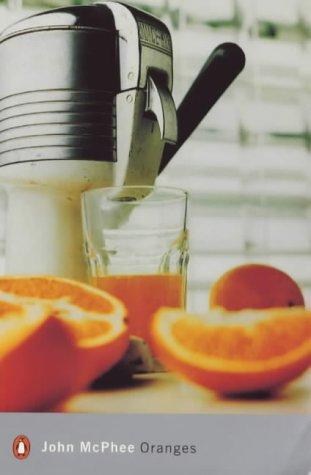 A whole book about oranges: focusing on the orange growing industry in Florida, but also touching on history, uses, research and biology. The book is 60 years old by now, so naturally some of it is outdated, but it was neat to see something so dedicated and nerdy. The writing is very journalistic and describes visits and interviews in detail, which was charming.

Despite being so short, it took me several attempts to get through the book, because as much as I like people nerding out about things, not all parts were equally interesting, especially knowing that some were outdated.

Citrus fruits do not grow based on the seed: you can get a grapefruit from an orange seed, or a bitter lemon from a grapefruit seed. You can even make a single citrus tree carry several different types of fruit: lemons, limes, grapefruit, tangerines, kumquats and oranges, all at the same time. There are even single fruits, so-called chimera, that appear as a combination of different kinds/colours of citrus fruits, which occur as a genetic mutation on grafted trees. Trees are budded, which leads to faster production levels (budded trees need only five years, compared with seedling trees and their fifteen years), and are virtually free of thorns, while seedling trees are full of them.

Oranges and their products are volatile and inconsistent in flavor – probably no other drink is as inconsistent in flavor except for maybe wine. Even fruit from the same region, place, row of trees or the same tree vary noticeably. Fruit that grows high up is sweeter than fruit reached from the ground. Outside fruit is sweeter than inside fruit, south side oranges are sweeter than east and west side oranges, which are still sweeter than north side ones. And even within a fruit, the blossom half is sweeter, to the point that people living with orange trees often only eat half the fruit.

Many parts of the orange depend on climate and weather. The albedo (the white part of the skin) grows thicker in arid climates like in California. The actual colour orange depends on coolness – oranges can be perfectly tasty without getting their colour. Oranges even can turn green again depending on temperatures and seasons.

Kinds of oranges are kind of wild, but the Valencia has emerged as the most planted one. They stand out because they alone are on bloom and fruit at the same time.

Orange trees are susceptible to many diseases that can spread rapidly, and often the only cure is to isolate and cut down a whole section of trees.

Other natural phenomena also make problems. Lightning kills as many orange trees as any disease. And temperature is just the absolute worst. Some groves have great wind machines just to mix the colder lower air with warmer air from above on cold nights. Others have a sprinkler system, that gets turned on during short freezing periods, because freezing water releases heat and can preserve the fruit at zero or above-zero. There are special forecasts that will tell growers the night temperatures on a per-grove, per-altitude level to make sure the fruits survive – temperatures can differ by as much as 10°C within a mile. Despite all of this, oranges are remarkably resistant to bruising, and can easily absorb blows that would split or bruise apples. Oranges can even be bounced like rubber balls with no destructive effects, though drops from heights larger than 30cm will lead to the fruit breathing too rapidly.

Orange trees average about 1500 fruit at the same time (though certain historic trees reached a magnitude more). Picking the fruit is not trivial, of course. Workers start when the dew dries, because wet orange skin grows taut and is easily damaged. Fallen fruit cannot be picked since its skin bacteria count is often beyond permitted levels. Picking systems and tools differ. Automation turns out to be not feasible, though, as especially Valencia trees carry ripe and new fruit at the same time.

Different from fruits like apples, oranges need to go through a careful washing, cleaning and waxing process before they are sold. The cleaning is necessary because the fruit arrives covered by all kinds of things, including sooty mold and dews, and the washing process removes the natural surface wax. Without the wax, the fruit would breathe too rapidly and would begin to shrivel very fast, so it gets replaced with an additional waxing step.

Citric acid is well-known to be useful as a cleaning product, but the same goes for all citrus fruits: Jamaican mechanics use (or at least used) oranges to clean grease and oil.

Citrus fruits originate from the South China Sea, spread on to the Malay Archipelago, then on to Africa. The word itself evolved from Sanskrit nāraṅga, with the prefix nā meaning fragrance. The word spread as nerantzion to Byzantium, as aurenja to Provençal, where it turned to Orange, which was also the name of a local town. In the early sixteenth century, Philibert of Orange, was awarded a good part of the Netherlands, and that’s where you get the house of Oranje, eventually. And, incidentally, the German town of Oranienburg, where I’m writing this summary.

More history fun facts: The Golden Apples from the Greek myth were thought to be citrus fruit by the Romans (“apple” used to be a more generic term than it is now). When the Byzantine governor of Rome was recalled against his will in the 560s, he sent a crate of Italian oranges to the King of Lombards, inviting him to overrun Italy, which Alboin promptly did. But for a long time, oranges were not eaten as food – they were used for their fragrance, for example in perfumes, and as seasoning. As a consequence, mos of Europe grew Bitter Oranges, not the sweet versions we are used to today. They were also used as a status symbol (seen on many period paintings), or as equally pretentious gifts.

There were also traditions (“Pomeranzenschießen”, shooting oranges off each other’s heads) and superstitions surrounding oranges – in parts of Germany, for example, oranges were treated with suspicion into the late seventeenth century. This only went for parts of Europe though, whereas of course Italy, Spain and Greece had a long-running tradition growing citrus trees: The probably oldest European citrus tree lived for 473 years and died in 1894.

At the time the book was written, Florida produced about a quarter of all the oranges grown in the world. The region called the Ridge on its own outproduces Spain and Italy.

The book goes into economics of orange growing and selling a lot, including the different types of orange juice. I passed over most of that, because it was both US-centric and out of date.