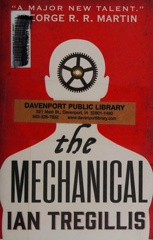 The Mechanical by Ian Tregellis is a case of the scenario being better than the implementation (though not as bad as it could’ve been). The scenario: in the late 1400s, a Dutch alchemist manages to create quasi-robots, the titular Mechanicals. With this power, the Dutch take over the world in place of the British. In roughly our time, the only remainder of non-Dutch Europe is a French resistance in North America. The Dutch are extremely Calvinist and say that machines can’t feel or think, while the French are naturally Catholic and have decided that the mechanicals do have souls and enslaving them is bad (mostly to spite the Dutch, I think). Also, their spymaster is called Talleyrand (and happens to be female and one of the POV characters). Which is very cool.

Sadly, the plot and storytelling fell apart for me. We get told right in the beginning that the Mechanicals can think and feel and are in constant pain due to the golem-like geas placed on them, so there was no question of who the baddies were, ever. There is also a major case of “everything goes wrong and nothing gets resolved, hope you like your end-of-book cliffhangers”, so unless you’re in the market for a sequel, you won’t be happy. Apart from my feelings about the black-and-white plot, one of the POV characters is apparently meant to appear badass and impressive, but due to their constant bad decisions and high opinion of themself, they come across as dangerously unskilled.

Final warning note: there’s major ick. Think graphical brain surgery while people are awake and naturally quite a bit of people in pain because they are compelled to do thing. And other graphical descriptions of, like, losing an eye, in great detail. Way more gross than the nonfiction book about surgery in the 1800s I read recently, and that’s saying something.