Inversions by Iain Banks is a non-Culture Culture novel – unexpected and refreshing. The story is told in Banks’ usual masterful style, and all of pacing, characters, depth, and content are without significant annoyances. I think this is as much Fantasy as Banks will ever get, and I enjoyed the never-quite-touching storylines, and the connections you really had to look out for (and that were never explicitly explained). The fact that I knew that this was a Culture novel added another fun layer, too, because I was constantly considering who was part of the Culture and what their goals were.

The story grows darker towards the end, and while Banks always writes with unprotected people and minorities in mind, I was a bit speechless at how well he first portrayed two cultures filled with class entitlement and elitism, and then contrasted them with torture and a horrifyingly vivid recollection of rape, involving a discussion about the responsibility and reactions of men as a whole. Wow. 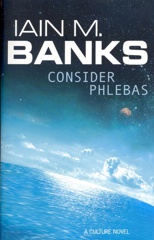