The Revolution Will Not Be Civilized

More of the same, with the novelty worn off a bit. Some new interesting Roles (Bumbling Conjurer, Exiled Prince), and some hints at future escalation into less of the pedestrian wars with soldiers at borders and more of the world/universe crushing stuff. There’s a lot of maneuvering against the protagonist’s villainous nemesis, which I didn’t really care about. But then, I didn’t care about the big battles, either – I just hung around for the worldbuilding (which had some really good moments).

I still think that you shouldn’t think about the morality and the whole Evil thing too much, but I have also come to the conclusion that the book is better than the author’s understanding of good and evil. Most of the book also deals with the protagonist getting increasingly crippled, but with a ton more books after this one and no general raving about the focus of those, the comeback was sadly predictable, and not all that interesting. Meh.

On the positive side: Again with some really good situations and moments: Shooting the approaching grandstanding enemy, some deeper world-building, cool people on all sides. And the writing, while generally very average, has sudden shining moments once in a while, as a pleasant surprise. All characters get motivation (clumsy is better than nothing!), and there’s a fair share of economics and economic history going on.

Future Me: you stopped here, in case you want to continue. 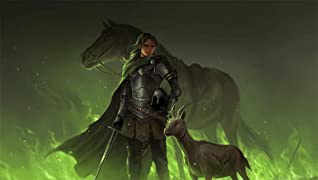