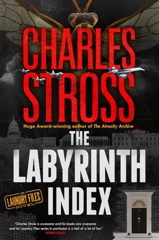 The Labyrinth Index, the latest entry in Charlie Stross‘ Laundry Files series … escalates. When the last volume of the Laundry Files featured an apocalyptic ending, I was under the impression that Charlie was fed up with reality overtaking his books pre-publication, and escalated to a level reality isn’t yet willing to follow.

The Labyrinth Index introduces Mhari as the protagonist and POV character, which I found refreshing and nice. Laundry protagonists are a bit chancy, for me – Mo was part great, part meh, and Alex was 90% annoying. Mhari is about as good as Mo, for me, and a bit more evenly written (or the transition to yet-another-protagonist is less jarring than to the first non-Bob one). Bob and Mo are not part of this story, btw – we accompany Mhari on a field mission to the US, where the conflicts between the UK’s new Lord and the US’ new Lord are dunked out.

I enjoyed the plot, which is fast-paced and surprisingly well-explained. The recent Laundry books leave less to the reader’s deductive reasoning and explain and show more in detail what’s actually going on. Instead, the subtle clues now concern side action that will mostly become relevant in a later volume. Like the last book, a lot of characters are drawn from previous books, but it’s more of a solid recurring cast, and less of a “Use ALL the characters”, which we had last time.

As usually, the book is well paced (and by that I mean: escalating consistently), well-researched, clever, and plain fun. It goes deeper into gross and disgusting aspects of the Elder Management than previously, which can be a bit graphic (not that I’m complaining, just as a heads-up to other readers). It may not be the best Laundry book, but it meets all my expectations and then some. 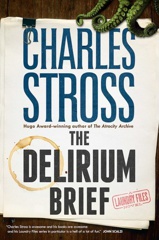 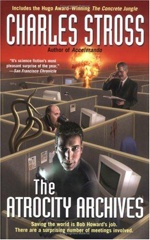