A junior ambassador from one alien nation and planet to another, which boasts of a highly complex language and culture? Finding herself scrambling to catch up with her predecessor (rudely murdered, instead of being in her brain as would be appropriate), trying not to share his fate? Sudden conspiracies, even more complex cultural games, plus an assistent she’s very much into? Hell yes.

A Memory Called Empire by Arkady Martine is exactly what I like to read in sci-fi. All people in this novel are human – but they don’t necessarily see each other this way. Our protagonist is the ambassador to a sprawling, huge empire that has a terribly lyrical culture, where everything is an allusion or a poem or a reference, and probably all of these rolled together. She has to come to grips with her new posting, and find her way in this world, while figuring out why her predecessor is dead, and … well, the empire collapses.

This on its own would be fascinating, but we don’t only get to see the culture clash between our protagonist and her empire assistant, oh no – without giving away too much, this story is also about neural implants, and self-modifications, and different definitions of being human. And as if that wasn’t enough, we also get to think about the further reaching implications. What if my culture says that your culture does hideously brutal things that make it barely human at all – but I have to choose between allying with you and potentially dooming all thinking galactic life? Yeah, that.

In one or two places, the book takes the easy way out of these moral quandaries, but then again, that’s fair: We do the same in every-day life. We break problems down, or circumvent them, and don’t always meet them with intellectual curiosity and honesty head on. I enjoyed this book very much, and I’m extremely impressed that this was the first published book by this author. Apparently a second volume is in the making, which I’m very much looking forward to.

But to be honest, what spoke most to me in this book is how it mirrors exactly how I feel about interacting with English native speakers on the one hand and English-speaking culture on the other hand. The casual talking-down, the constant taking-for-granted and the occasional cutting inadequacy are stunningly the same, just as the constant threat of cultural and non-cultural imperialism. Language works slightly differently, but so does EVERYTHING ELSE. Smiles. Hints. Politeness. It’s absurd, and hard, and the way the (don’t take this the wrong way) cultural primacy handles it is not enjoyable. The way the protagonist struggles between her culture and her love for the Teixcalaan culture (and her desire to be somewhat accepted or at least acknowledged, knowing how impossible it is) is painful because yes, this is me. 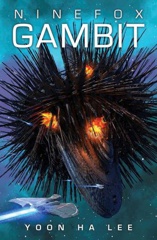