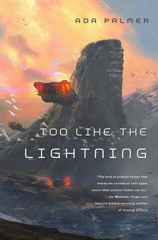 For me, this was a five star books, plain and simple, but I completely understand why it would be a 0-, 1-, 2-star book for others.

It’s pretentious at times. It wants you to have classical knowledge of ancient Rome and 18th century France. It plays on that knowledge, and knowledge of literature in 18th century France explicitly. At least it explains lots of the in-jokes, so it’s not terribly arrogant in choosing its readership, but the pretentiousness is there. The storytelling is great, full with an apologising, opinionated actor-narrator, with intermezzi by other characters.

That said, I loved it. I loved the world, the 24th century world that consits of lots and lots of non-nation based groups (and some nation based ones), and seven major orientations everybody chooses (or becomes a blacklaw, which is fine, too): The Masons who have resurrected ancient Rome, the Humanists who have a flexible democracy, the Mitsubishi super clan who are focussed on land ownership, the Brillists who go ahead and analyse anyone and everyone, the Cousins who are something like the priests of a world that prohibits organised religion, the Europeans, based around a borderless idea of old nations, and the Utopians who are everywhere, especially in space, on the moon, and terraforming Mars.

And then it just ends in the middle of it all. sigh 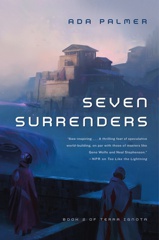