The Diamond Age: Or, A Young Lady’s Illustrated Primer

My relationship with Neal Stephenson is marked by frustration and enjoyment alike. I liked Anathem a lot despite it’s many flaws, because it hit the perfect sweet spot in subject matter for me. Diamond Age did not, so it’s flaws stood out more.

We are in the future, where nanobots and matter converters are everywhere, and life happens in tribes/phyles instead of nations. There are all sorts of major and minor tribes – tiny hacker ones, or big ones like the Neo-Victorians, who have returned to Victorian fashion, courtesy, and ways of life. They manufacture amazing things, and the most amazing is the Young Lady’s Illustrated Primer, an interactive intelligent book. We follow the book and everybody who’s life it touches: the inspiration, the engineer, the recipient, the actors involved, and the families and friends of all those people.

First off, I enjoyed the first three quarters of the book a lot. I liked the worldbuilding, even though it felt as if there was no coherent backdrop, as if everything was just whipped up for the reader once we laid eyes on it. I enjoyed the titular magic book, because MAGIC BOOK, and also because it did not share the many frustrating limitations of eReaders today. I liked the characters too!

Even though throughout the books there were weird bits of, for lack of a better word, cyberpunk propaganda, I still found most of it enjoyable. I mean, I like the Lord of the Rings, too, and I can generally be won by good worldbuilding even if the plot is lacking or absent. I thought this would be one of those books.

And then the last act happened, which was not conductive to my suspension of disbelief to say the least – most of all because I felt that the escalation route had not been prepared properly. It felt disjointed, awkward, dramatic for its own sake. And then the very final ending was just … what? I’m all for escalation (I like The Laundry Files after all), but this felt random and not in a good way. Also, towards the end the propaganda was more than a slight annoyance – I really hate it when fiction tries to push a political agenda in a very transparent, clumsy, moralising way. The endgame boiled down to a barely-introduced conflict between the Feed and the Seed, two different philosophies regarding technology and matter production and it’s hard to imagine a more heavy-handed political insert.

I’m glad I read this book, but I’m not sure I’ll read more Stephenson any time soon, especially since people tell me that his inability to stick the ending is typical.

I like the concept of post-nation tribes in a modern world with near-ubiquitous resources. I thought that a way better version of this concept was presented by Ada Palmer in Too Like The Lightning. This book is hard to read and recommend generally, but I also love it a lot.

For a more readable, more cyberpunk recommendation, I’d go with Rainbows End, which does different interesting things with ubiquitous information, and features less of a jarring plot line.

(If you like the transparent political inserts: First off, eww. Secondly, try The Sword of Truth or if you know German, Pünktchen und Anton.) 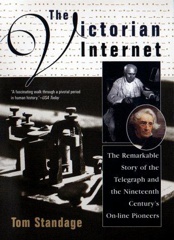